My Single Life: A love story 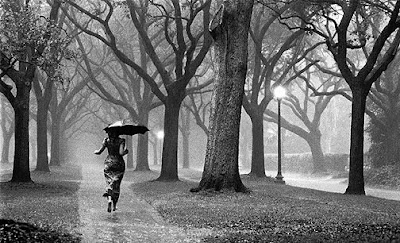 I woke up at six today and looked out the window to see sheets of rain coming down. Its sort of like mother nature taunting me with "You love running? Run in THIS."  Thursday morning, I was shivering in my room, and put on my heavy duty winter pants and my north face and was still cold. When I opened up the door to see pouring rain, I slammed it shut and went back to bed. I was already freezing, I didn't want to get wet too.

Today, I wanted to get out there (sort of, a part of me did want to go back to bed) and apparently I was the only one who felt this way since Lincoln Park was nearly empty, with only a few dog walkers out. I wanted to do 8x800m with alternating laps in 3min then lap of rest. This was my usual speed workout during training. While standing at the corner, I was shivering and my teeth were chattering as I started getting soaked by the rain. I'm sure that did wonders for my health. I set my auto lap at 0.5 miles and started running around the park. When my first half mile was over I looked down to see a 4:37 time. Right, warm up. I upped the pace for what would be a speed lap, and came out at 4:16.

So, I asked my body, I hauled my ass out here in the freezing rain at 6 a.m. to run over race pace!? I don't think so!

Well, my heart replied, could you give me a little more time to warm up. You didn't even give me caffeine.

Yeah, my stomach piped up, usually you both feed me and give me coffee before making me run.

I started to pay close attention to my body. I left my orthotics at work, and my left foot complained about that lacking arch support. My legs didn't enjoy the hard cobblestone. I looked at my pretty, purple shoes and then at the wet, muddy trail on the inside of the park. It was time to wear these babies in! As I jumped over and started running on the trail, feeling my feet stick a little and some water and mud cover the backs of my legs, I sort of felt like I was a little kid again. I started laughing and took up my pace, looking closely to avoid a tree root or rock.

My legs preferred the soft trail. My hips felt great. My hunger dissipated and my heart-rate started getting up there. My arms were shoved inside my windbreaker, and my hands warm. My hair was soaked and now there was sweat mixing in with the rain, which started to feel really wonderful.

I gave up on being frustrated about my pace, and all of a sudden realized how beautiful everything was. The rain was getting lighter, but it was still dark out, with a hint of the sun rising. The leaves are starting to change color, the streets and cobblestone sidewalk were slick and shiny. The park was nearly empty and since it was raining, I left my iPod at home. It was pretty silent other than the occasional car and then I smiled to myself thinking: moonlight and champagne.

It was still dark so the moon really was still out, but I finally popped the bottle of champagne.  The run became a wonderfully sensual and romantic start to my morning. It wasn't all that great of a speedworkout, but I felt so incredibly relaxed and calm. My hot shower when I got home was heaven and I couldn't help but think about how much I love my body--with a confidence I had always lacked. Now, I feel bummed about staying in yesterday morning.

Now, a part of me wants to end this post here about how a lovely morning run was really romantic. I would quote McDougall again ("Grueling, grimy, muddy, bloody, lonely trail-running equals moonlight and champagne."), but a saw a bit of a trend with the way I describe my interests and I think I'm going to digress a bit.

This thought process started after last night's Capital's game, while I was waiting for the bus. I'm wearing red, I'm a DC resident, and I love hockey. Yes, I'm a Caps fan, but I just don't have that draw to the team like I do the Buffalo Sabres. Its like lately, I meet a lot of really, really great guys, but there is no spark, I just don't connect with them like, well, other people (long story).

I got homesick again like the last time I went to a non-Caps v. Sabres game at Verizon, and last night I went to the bus stop, took out my iPod and decided to go to my Sabres playlist. There I have Sabres remixes from the local radio station Kiss 98.5 and the Sabres Anthem from 2007. I have both background songs to the remixes on my marathon playlist: Move along by the All-American Rejects and The Adventure by Angels&Airwaves, so I think I'm gonna replace it with the Sabres version. And, of course, when I do mile dedications, the Sabres get one. Anyway, I realized I had been talking about the Sabres all night instead of focusing on the Caps, and I was sort of feeling like those times I go on dates and just compare them to someone else the whole time.

Once I explained to a guy sitting next to me at a game, that I had the crush on the Caps, I was interested in a long term relationship, but they would have to accept that I would always put my long distance team, real love, first.

So all this makes me wonder why the hell I compare almost everything to being in love and romance? Which is funny, seeing as I'm one of few girls/people I know that don't want to be in a relationship, and is totally fine "seeing other people" but not actually having a boyfriend. And maybe, I realized this morning, its because I've been able to draw those sensual, romantic, passionate feelings from other aspects of my life.

So, next time I go for a run and come in feeling like I just went on a really good date with great expectations for the next one, I'll be thankful I don't need someone else to make me feel like that.
Posted by Brittany Zale at 1:36 PM