Sticks and stones may break my bones but they won't keep me from running!

This was my motto as I walked over to the start line. Yesterday, at 4:00 p.m., I decided just to try running, despite my broken toe, and found it hurt less than walking in my sneakers (sandals are best). My baby toe is broken, but I over-pronate so I decided to run the next morning without my orthodics and let my feet work as normal. So what if I hadn't run in two weeks? I clearly had forgotten the post about me actually having limits to what I can and cannot do.

Race morning
Everything went wrong the morning of the race. With little preparation, I had to get my clothes out the dryer, wash dishes for breakfast, put my bag together, and I had gotten less than 5 hours of sleep. Wmata.com told me that there would be a bus I could take at 5:21 a.m., but it never came. I got on the phone to call a cab and started walking to Union Station, in the 25 minutes it took me to walk, I was on hold, and so just grabbed a cab once I arrived. One mile down, 13 to go.

I didn't know what to expect at the start line. The website was poorly done, and I had no idea how many people were racing. I didn't have a bib number until I got to the start area and then had nothing to do but sit around and chat with other single runners. It was then that I realized I forgot my Garmin! What would I do without it?! On top of that, my iPod had little juice left, probably just enough for 2 hours of playing.

My plan was W.A.D.--Wait. Accelerate. Dominate. I promised myself that I would learn how to start slow. There were no starting corrals, we just all lined up and the race started about 10 minutes late. I felt pretty good the first couple miles, although I always think these miles are the worst since I'm not completely warmed up. My biggest fear about running this race did in fact happen: the adrenaline masked the pain. You know, that same adrenaline that during MCM made me think I was running downhill instead of uphill? I was thinking that my toe felt awesome, and it wasn't until Mile 3 that I really started feeling it.


I learned today how my feet work, and that you use your baby toe most when turning (makes sense, right?). Unfortunately, you were turning every half mile in this course. When I came back to the start for the first loop, my toe was throbbing, and just once I hit it wrong and a sharp pain shot through it and I stopped to a limp. The start/finish line was right there, with my bag, a way home, food, and water.  I didn't have to be a rock star today, I already PRed in both halves of the Marine Corps Marathon just two weeks ago.

I felt completely defeated and ran to the right half of the street to end the course. This was a stupid idea, I should have just run the 5k or did the Mile walk. But, I signed up for 13.1 miles. I raised $1,045 for this cause. I want to start running ultras and here I was willing to take a DNF... for thirteen miles? I have never, ever not done the mileage I set out for any run, unless at one point I could no longer run. I was still running, and there was no way I would start quitting now!

So, I didn't have to PR today. No big deal. Today I would PR for the half-marathon I ran with a broken toe. I just ran a 3:22 marathon, I was already a rock star (cue Pink's So What which came onto my iPod). I slowed down, took it easy, and focused on smooth running that didn't impact my toe. 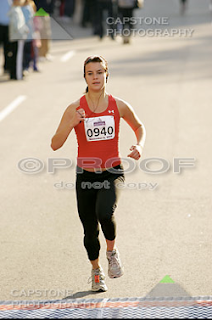 Deciding to slow down during a race can really kill you. People start passing you, and its hard not to feel defeated. I took a lesson from MCM and made myself smile. Somehow, running with a smile on your face is so much easier. The second lap got progressively better, and I learned that if I walked the turn-arounds, it didn't bother my toe. Now the biggest problem was a blister starting on the inside of my foot. Since I didn't have orthotics in, this changed how my shoes fit. That, and I could feel what the lack of support was doing to my legs and my knee even started hurting. At Mile 8 my quads started to burn, I was thrown off by this, and then I remembered that I did just run a marathon two weeks ago.

When I finished the second lap, I wasn't in the best of shape but I kept pressing forward. At Mile 11, I realized that I needed to take a break from running and let my toe heal, that these next two miles were the last two I would run for the next three weeks, and man did that effect me. I don't where the pain went but I was flying. I passed runner after runner. I may have missed the "Accelerate" part of the plan, but I was dominating here at the end. Finishing a race strong like that just feels amazing. I passed a runner that was way ahead on me at the end, crossed the finish line seconds before her and internally pouted; I was just starting to have fun! 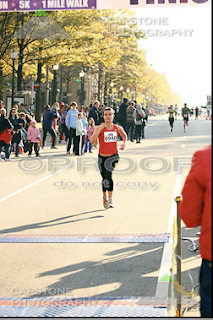 As I was talking to some other runners, one of which I approached because the group was talking about his Vibram Five Fingers, I told him to watch out, since I just broke my toe. "You have a broken toe right now?" I shrugged. "Its just my baby toe, not too big a deal." As they all spoke about going home and watching tv, I mentioned I had hiking plans for the afternoon. "Wow, you really are crazy." Why, thank you!

I started the race today thinking that I wanted to channel some badass runner who would rock it out despite an injury, like Jenn Sheldon. And then, I realized that I had enough to draw from myself. I could be badass. I have a thank you e-mail to send out to all the awesome donators, did I want to say "hey folks, thanks for helping me raise all this money, but I got a DNF" or tell them about an awesome race and that I had to work hard to finish?