My tattoo isn't pretty and I don't care

I've wanted a tattoo since I was 15 or so years old. I wanted something meaningful. I wanted something pretty. I've been brainstorming tattoos involving pretty crabapple blossoms (my hometown's name is crabapple in the local Native American language) or snowflakes (that hometown is outside Buffalo). When I got my tattoo last weekend, I loved it because it wasn't pretty. It wasn't supposed to be sexy or attractive. It's just cool.

Not to mention, it's on my foot, and I'm a runner. So, it's not like these things are pretty to begin with. 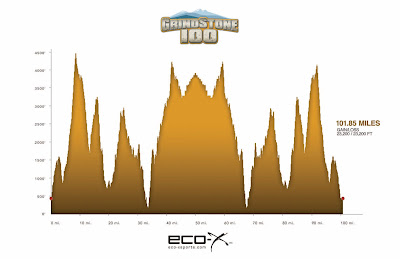 I remember on October 1st last year, sitting by a lake enjoying a beautiful fall day in Virginia. I was drinking a beer and celebrating my 23rd birthday by starting a 100 mile race in just a few hours (I pregame races sometimes). We were talking about tattoos and Brian and I brainstormed a tattoo of the impressive Grindstone elevation profile onto a foot. 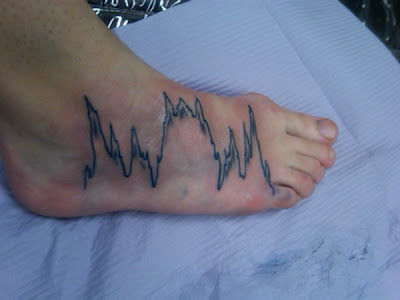 I loved the idea immediately, as long as I finished of course. I didn't like the thought of having a tattoo in recognition of a 100 miler since I was planning on doing several more. But Grindstone was more that that. This isn't a tattoo to memorialize a race, it's a tattoo to remind myself that I can work hard and be dedicated. This elevation profile at one point terrified me. I've never considered myself hard-working, I'm way too laid back, but I thought up a crazy goal and here I was pulling through and doing it. I felt like I had learned so much. This was to memorialize that we can surprise even ourselves.

I get that it's permanent, and in 15 years I might wish that it was "prettier" or more "feminine." When I voiced these concerns, I got the usual retort from my boyfriend. "You need to re-evaluate what is and isn't feminine." And when I roll my eyes and say something like "but it's not." He'll mumble something like "this isn't 1953" and then starts talking about hot, athletic-bodied tennis players. That wear skirts.


He'll add "You live the feminist notion that we all create what is feminine for ourselves, that we self-define and derive confidence not from conformity with a dated societal expectation, but from being you." But is the traditional idea of feminine really outdated? At first I think that it is, that we still divide the athletic girls from the girly-girls, but the more I think about it, this is not the case. If it was, there wouldn't be so much pink athletic gear.

CrossFit makes me feel even less girly than trail running does. It's not a big deal when you lose toenails, but now I also have blisters and rips on my hands. I got my nails done a month ago and realized that they hadn't had polish on them for almost two years. That day I went for a muddy trail run and had to dig perfectly manicured, red nails into the mud in order to get up a hill. I wished I had a camera. I could go on--I don't remember the last pair of heels I've purchased, but there have been several pairs of running shoes since--but I am in a time where I'm re-evaluating what "feminine" means to me.

I come from a  family of four girls and my dad. I never excelled at anything involving catching or throwing, and so I understand why I did dance, gymnastics, and cheerleading, but we always did girly things. My mother took me and my sisters to the mall a lot. We got our eyebrows waxed every two weeks. To do or not to do cheerleading wasn't a choice that I made. We were reminded to put lip gloss on every time we left the house. I remember getting a serious talk from my mother about not wearing make-up to school and how I needed to get up earlier. She even paid for indoor tanning.


It's funny how my youngest sister and I, once we both moved away from home, have become the opposites of our High School selves. My little sister almost never wears make-up, has hair perpetually in a ponytail, and I had to beg her to just buy a pair of ballet flats instead of being in sneakers all the time. She spends all day studying and rolls her eyes at the thought of going through all that work just for school. She's a relaxed kind of confident about who she is and what she has to offer. She doesn't care about wearing lip gloss anymore either, as do I.

I've written before about becoming more confident and working through body issues, and while I still think that presentation matters, it's been years since I felt the need to always make sure I had make-up on. I'm not so insecure to worry about being girly or feminine. And yes, slowly the idea of being feminine is less about being a pretty girl and more about being confident. It started off with my being anti-feminine (I'm going to wear a sports bra all the time!) and it's turning more into embracing that I'm never going to feel the need to wear eye shadow again. Which is awesome. I feel much more happy with my new CrossFit sculpted shoulders and arms than I would be with a flat stomach.


The most incredible thing about who I've become since leaving home is that I've somehow developed some weird determination to prove myself. My mother always encouraged giving up with the going got tough--but I've done everything I can to prove that I'm not that little cheerleader anymore. I'm not delicate.

And the traditional idea of being  feminine is actually very unsexy to me compared to my new idea. Confidence rocks. Which is a reason why I'm cutting off all my hair this week. I'm going to rock a pixie cut starting this Friday, something I've been wanting to do for months. I think that, on young women, it oozes confidence and defies traditional notions of sex appeal and femininity--something that I think I'm ready for.

Yes, I have a new nose piercing, my first tattoo, and I'm cutting off all my hair. Now, who's going to buy me a motorcycle?

Posted by Brittany Zale at 3:40 PM