I knew I would hate winter training! I promise to never say this again, but running today was just miserable. That's honestly the best word for it. I really wanted to get in a 14-mile progression run (instead of treating it like a regular long run). During the first mile around the National Mall, the wind was so bad that I stopped moving while attempting a 7:30 min mile... twice. 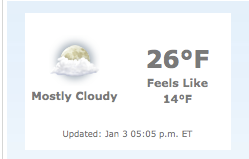 There were gusts of wind around 40 mph (according to weather.com), and I failed to check out was the temperature "felt like" before heading out. It read 30-23 degrees during my two hour run, but it felt like 10-14. I didn't dress for this at all. I lost my footing while crossing the bridges, since the wind was hitting my side and I couldn't run straight. I had on a base layer of tights and a performance shirt (not my nice Under Armor), a jacket, headband, normal socks and basic gloves.  My shoes ripped open a blister, and I looked down after just 3 miles to see my heel covered in blood.

My hands were the worst. After 5 miles, I stopped for some Clif shots and some water. The water was so cold that it hurt going down and I didn't drink anymore until I got home. Since I had walked trying to do all this, I cooled down significantly. My hands were so cold, that I could barely rip open the package. At one point, I couldn't move them, and they really stung, so I pulled my jacket over my water belt, shoved my hands in the pockets, and moved along slowly.

I wanted to turn back more times than you can imagine, and the will to finish those miles took enough out of me, I had nothing left to keep the pace up. I averaged a 9:22 pace. I tried really hard to be optimistic (like, this is considered speed-work running against the wind, right?), but by the end, I really was miserable.

Also, the 14 miles brought me a mile away from home, so I walked that last mile. I hope that was equal to taking an ice bath--it sure felt like one! I had a scorching hot shower, a stretch session next to my space heater, and now I'm all warmed up and walking around in shorts! (Ok, and knee-high socks, I'm not completely crazy). I hope everyone stays warm tonight, my tip is not to step outside (at all).

Posted by Brittany Zale at 7:21 PM