One of the coolest thing about MMT is that VHTRC hosts training runs on the course over three different weekends in the months before the race. I suspect the real purpose is that more people will drop out and make room for the members that didn't get the lottery. I always forget how little mercy these trails show your feet. After only 25 miles I wanted to sit down and be done for the day. This could be because it took so damn long. 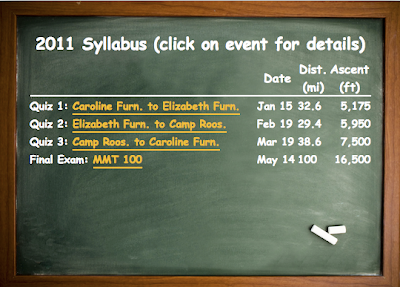 Now, I knew that my first ultra distance attempt since my 5-month running hiatus was going to be rocky (pun intended). I loved the vibe of this group run, it was large enough and long enough to feel like a race, but it was really low-key and relaxed. We started off in a big group, but this broke up quickly. I settled into a group of 6 or 8 for the first few miles, then it became a group of 4. It was hard to talk on the run because the wind was so strong and noisy that it was difficult to hear.

The only problem with this section is that it has 7 miles of road. Roads have been death to my IT band, and so I walked almost all of them. Despite the roads, they were still very pretty.

We certainly took our time, taking pictures of the amazing vistas and enjoying the warm, windy day. There are some seriously beautiful views on the run. I was surprised with how great I felt. I took my time on a lot of the trail, walked down steep downhills and roads, and was able to get through most of the run. There were two aid stations, and my boyfriend volunteered at them, so it almost felt like he was crewing for me again!

I walked into the last aid station, unsure if I should go on. I got through 20 miles at this point pain-free and I didn't want to push it. There was beer, food, and good company, but then I was told the most grueling climb was ahead of me, and so I decided to go on. Last year, I volunteered at the next aid station and people came in constantly in awe of this next section. It took some of the leaders 3 hours to get through, I couldn't pass this up! The next climb was a bitch, and to think I'd have to do this after 50 miles! I was nearing the ridge and all I could hear was the wind! Once I got up the mountain I could get in a decent amount of running. It was rocky, but mostly flat. At this point, I still felt good but I was getting tired and my body felt ready to fall apart. I almost blew away with the crazy gusts of wind heading over the mountains. Several times, wind sent tons of leaves into my face, or I had to stop and crouch down. I was a little worried that the wind would throw me off balance. 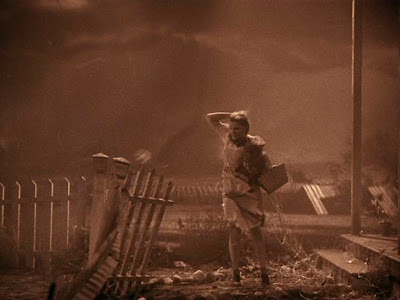 But it the wind blew me away and I ended up here: It would be totally OK because I would be the tallest person ever and I would beat them ALL at ultras.
Finally, I found the yellow blazed Stephen's trail (follow the yellow-blazed trail, follow follow...) and I was only 5 miles to the end! Things started hurting (hips, feet, knees) and so I decided to walk to the finish. I also took out my iPod and started jamming to some tunes. My next post is going to be about songs that are really about ultrarunning, you should check back every day this week. Like at Uwharrie, I was passed, but it was by cool friends and people that made me feel better instead of worse.

I was an idiot, and since I was taking my time I decided to move a tree off of the trail. But, there were pretty rhododendrons right there, so I carried it uphill and set it down where it was cleared. But when I threw it, a branch didn't make it and tore up my leg. Ouch. But, I felt really strong and cool and did something resembling this. 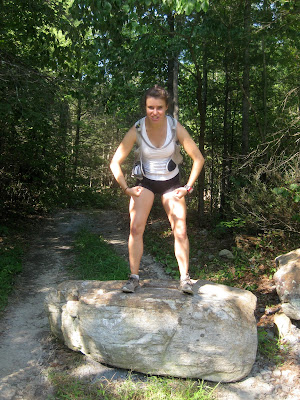 I loved the Stephen's trail, it was rocky and technical, but it was full of rolling hills down to where food and beer waited for me. I walked, I ran, and I skipped. My legs were torn up, my feet ached, my energy level was at a -2/10. I forgot about how much an ultra can take out of you as I spent the last few days exhausted. But, it hurts so good.
Posted by Brittany Zale at 6:19 PM