31 miles in 100 degree heat? I knew I could use this one as a "stop-whining-look-what-I-did" for at least a few years. Drinking out of a spring instead of a cooler? Post run grill, beer, and body shots?

Oh, VHTRC, where have you been all my life?! 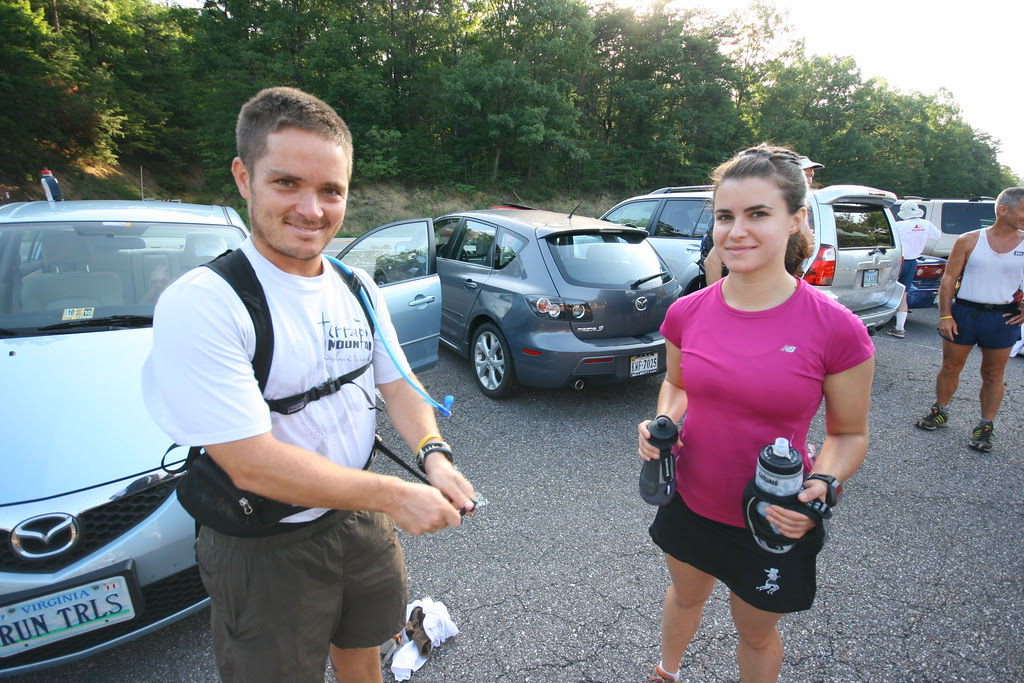 Hanging out with Mark at the race start
Picture courtesy of Bobby Gill
The day started late--at 8:00 a.m. I had two handhelds and started off on my own, with no one to talk to, and trying to decide what I felt like doing today. There were two distances offered because of the heat and I was contemplating either racing, or taking it easy to get more time on my feet. I started to join a group of 4-5 men, and ended up sticking with Sniper for the rest of the race. Sniper and Mark both ran Grindstone twice, so we talked about the race a lot. I ended up running the rest of the race with "Professor" Sniper who did what he could to get me well-educated on trail running. He's run almost 200 ultramarathons. 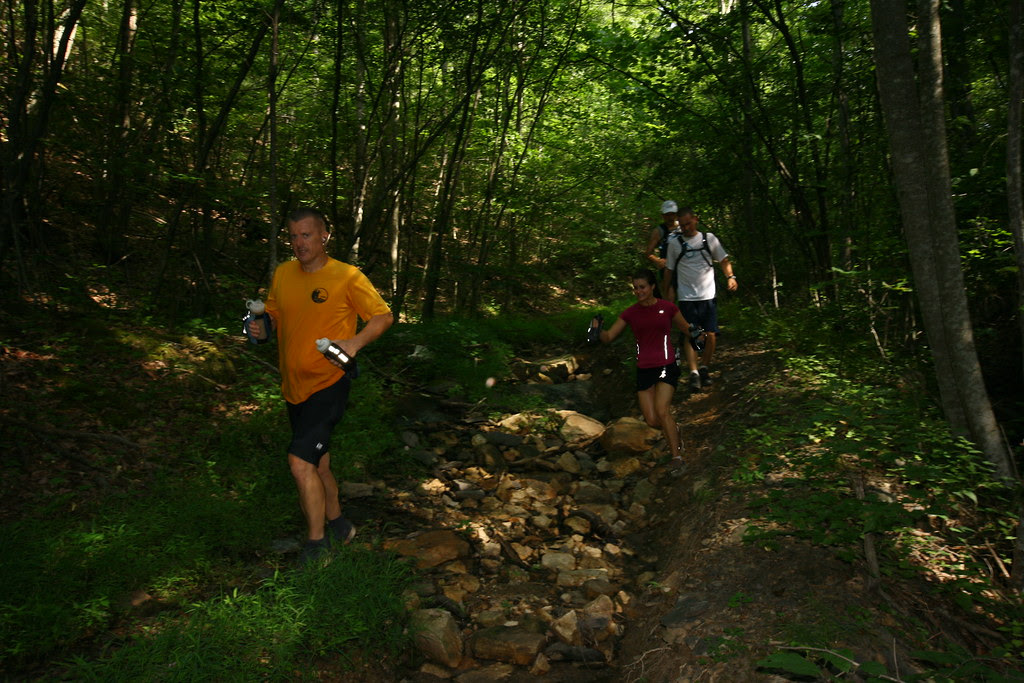 On the trail
Picture courtesy of Bobby Gill
The first 8-9 miles were without aid, with some fun climbs, rocky downhills, and hot weather. We came into the first aid station just to eat, before heading up a gravel road about 1.5 miles to a natural spring to fill up water and they poured buckets over our heads to soak us up and cool off. 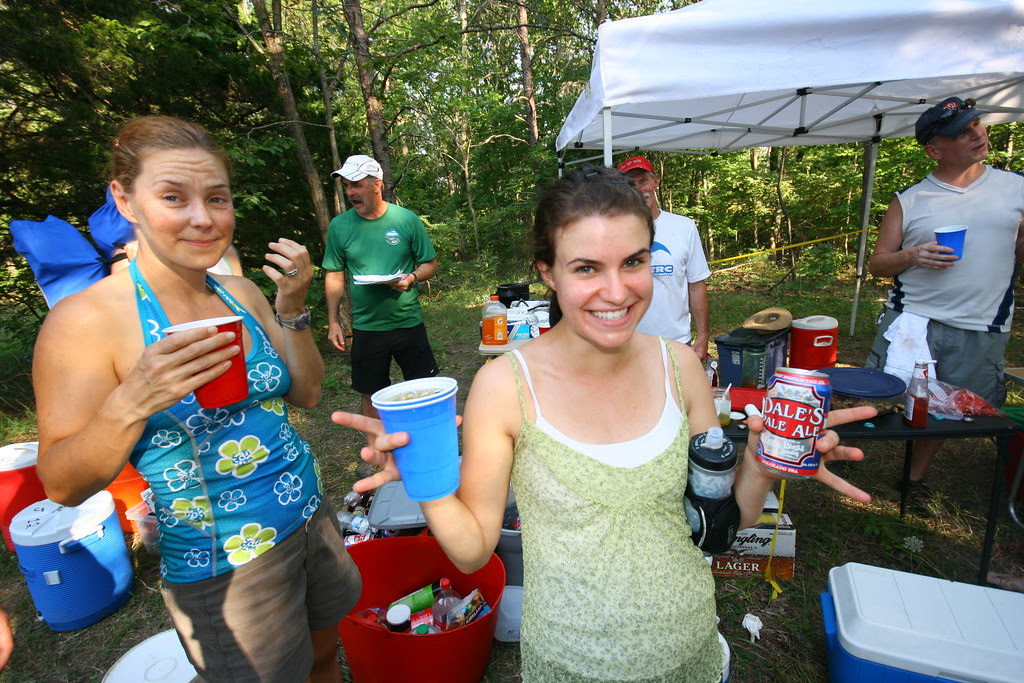 Best post-race party ever (with ultrarunnergirl)
Picture courtesy of Bobby Gill
The volunteers were amazing and I ate more at these aid stations than I did at my last 50k. I ate PB&J sandwiches and they settled very well. I need to remember to eat gels more because I was starving at the finish. I stayed well hydrated in the heat (I had to pee three times) and had no cramping. I was disappointed the race wasn't actually 31 miles, so we did the overlook twice, taking down those ribbons for the sweeper. I ended up doing 8,224 feet of elevation gain and 8,243 of descent--way more than I expected. 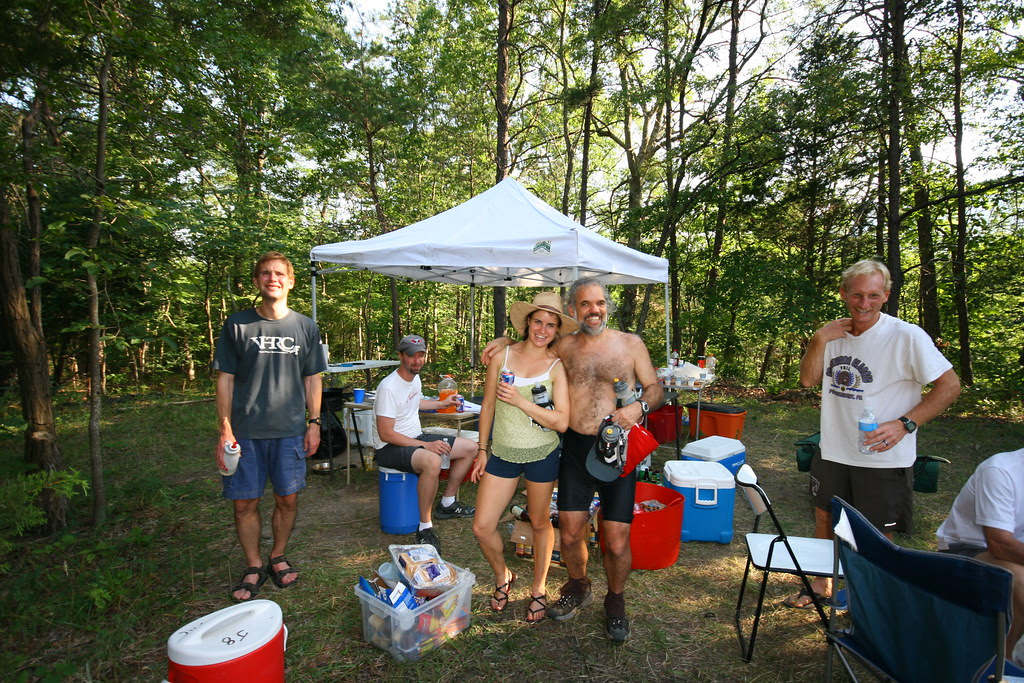 I'm big at stealing hats when I'm drunk
Picture courtesy of Bobby Gill
The after party was a blast. It was hot, but I handled the heat well. We all but bathed in the streams and I carried a rag to dip into ice water at the stations and in the creeks to cool off.  My knees felt way better than they have for any long run and with a slow, 8.5 hour finish, I felt great at the end. And yes, my average moving speed was only some 14 min miles, but I think it was smart. Sniper made the point that today would probably be more beneficial if we took it slow, since at Grindstone "this may be the fastest you can move."

and holy hell was he right.

Almost there!
On Sunday, my friend and I climbed Elliot Knob, one of Grindstone's big climbs. There was a 1.5 stretch of gravel road, and in the heat it was just way steep and really brutal in the sun. The four mile climb was tough on my legs, and I wasn't even planning on getting another 98 in that day. The loose gravel would make running down it without tripping very tough on the way back to the start.

The gravel road
I also realized that planning to run with a pack, and then not doing so all summer was a big mistake. I might plan to run with two handhelds. My shoulders were sore after hiking in my backpack all day.

At the summit of Elliot Knob
All in all, it was a great weekend. I got 40 miles covered, ate a lot of good food, was surrounded by good company, and learned a lot. Next time I'm planning on getting out to the mountains is for the big training weekend August 14-15th! Way too far away!
Posted by Brittany Zale at 11:23 AM