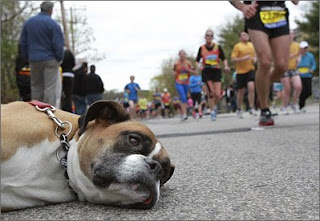 All day, people have been asking me "how did it go?" and my reply has been "awful."

It wasn't that my performance was awful, or that I'm not happy with my time and my huge accomplishment of running the Boston Marathon. I've never had a bad race. I've never hated running so much.  I've never been so tempted to quit in my life. "It was so hard" was what I said the first time I saw my parents at the finish line. My Dad's reply was "of course it was."

I'll start with the bad, and then end up raving about how great the event was in my next post. It was clearly meticulously planned, the crowd support was insanely amazing, and I've never been a part of such a big running event!

First, it was a tough journey to the start. Not the whole qualifying stuff, the hotel shuttle line, to the bus line, to the bus ride, to the race start, to the porta-potty line (wow I had to pee), and then finally getting to my start corral. While walking I actually thought the words "I really don't feel like running today." NOT what you want to be thinking at the start of the Boston Marathon!

I had to start talking myself through the race at Mile Three. That is unheard of in my books. I thought the 5k sign was the five mile sign. I always spend the first three miles of my run just adapting, so I thought I just needed to get into my groove. I tried to put as little effort into the run as possible. I just pushed forward and let gravity do its work.

At Mile 8 I really started to feel it. I felt just tired and my legs felt dead. My hips were hurting already but I just focused on keeping my pace up. I was waiting for my runner's high, an endorphin rush, my usual adrenaline rush, a second wave... anything! But nothing! I knew I was in trouble and I was really getting to the point where I was not enjoying myself at all.

I'm surprised I kept my pace up. At half-marathon I was around 1:40 and that's pretty surprising. I was holding on to hope and just waiting for the downhills to end. My quads really started cramping. This got unbearable at Mile 14. The song "Eat you up" came onto my iPod and I felt like it was the course serenading my quads. And I still had 12 miles to go.

Miles 15-19 are a blur. I kept my pace under 8:00 until Mile 16--don't know how I did that. I was actually ready for the hills at Newton because I wanted to get off the downhills. My quads were screaming. My energy was at zero. I hit "the wall," which pissed me off, damn it! I liked to think I didn't have one! The last water stop at 19, I finished my water off to the side and just stood there. A girl in the crowd told me "Six miles to go! Keep going!" and I remembered that this whole marathon-thing started with a 6 mile run in 2006, and so I started running again, choking to keep tears down, and focused on making every mile.

Seven more miles after reaching that point of exhaustion is awful. Just no fun at all. I tried reminding myself so many times that I love doing this. I'm a runner. I love running. I actually seriously doubted that I could finish the race. But, I had a jacket, hoodie, and a t-shirt I wanted to wear with pride. I knew every mile I pushed myself would come back to make me stronger and better during the-race-that-shall-not-be-named. I stopped drinking water because I knew if I stopped I wouldn't start again.

I kept up my pace pretty well until Mile 23. And every time my watch beeped, I was surprised to see my pace. How was I doing this?! A toenail started bothering me and once heartbreak hill passed and we had all downhill running to go, I was reduced to a mix of running and limping. My quads were dead and my foot was killing me. Every mile after 22 was hard as hell. It was hard to have the strong happy runners passing me because I've always been one of those! I hated the weak finish, and yet I was proud of every mile marker I passed because I was working so hard to get there.

At Mile 25, I was able to pick it up for a moment, until being reduced back to my shuffle. But hell, when I turned to see the finish line, my quads were fresh feeling and I took off. I ran as hard as I could and I've never been so proud to cross a finish line. And, I reached my real goal: I gave it all I had. By the time I finally made it to the space blankets I was shivering and choking down tears again. I was spent. Getting that finishers medal felt amazing--I don't think its ever meant to me as much as it did today. I've never thought that I might not finish a race before.

A few months ago, I doubted I could run a marathon by mid-April. I had to work through an injury and rebuild my miles again while taking it easy on my legs. I ran 32 miles two weeks ago and a marathon two weeks before that. My taper included getting so sick, I couldn't run for a week. Hell, I did freakin awesome under the circumstances! I ran the Boston Marathon today! My goal for the past 9 months! I'd rather give birth than do it again, but I finished, I never stopped running and I worked through a lot of pain. I feel great about the race, no matter how awful it was (that's my word for the day).

Thanks to everyone who inspired me, who supported me, and the overwhelming amount of texts, e-mails, and twitter shout-outs yesterday meant more than you could ever imagine. And thanks to my parents who made it out to see me run! They were right by the finish line and got to see the elite men finish--how cool is that!?
Posted by Brittany Zale at 12:07 AM

Email ThisBlogThis!Share to TwitterShare to FacebookShare to Pinterest
Labels: Boston