Volunteering
In preparation for Grindstone 100 in October, my friend Brian and I signed up to work the Roosevelt aid station at the MMT 100 race. It was in the same area, same distance, and we needed the volunteer hours to qualify. I was hoping to learn as much as I could about ultramarathoning, but I got way more from the experience than I feel like I gave.

The Roosevelt aid station was the first aid station a pacer could join, and so there were a ton of experienced ultrarunners hanging out. I met so many awesome people and talked with guys who have done several 100 milers. The runners were coming in slowly at first, and they all looked so great! I didn't understand it! We were the aid station at mile 63, and these guys looked like they were at mile 12. The first runner was a whole 45 minutes ahead of the second. Then finally these guys arrived, and I thought "that's what mile 63 should look like" 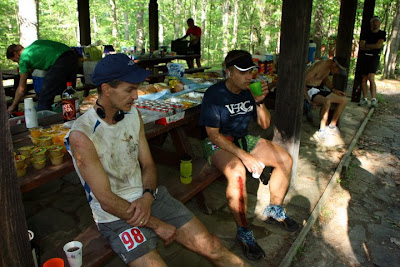 As the night started, the runners looked worse and worse. Since we were so close to the start line, many dropped at our station. We had hot soup, sandwiches, potatoes, fruits, desserts, etc. When runners came in, I would fill up their packs, help them get food, help administer first aid, and send then on their way. It was a blast! Then, a guy came in saying he had a rough time with his toe. I said I would do what I could to help. He took off his shoes and socks and... 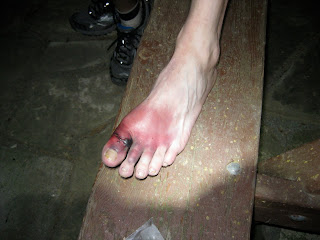 I was dumbfounded. I had no idea how to handle this.  Another volunteer went to get our aid station captain. This had happened at mile 19. Nineteen! And he continued running on it until mile 63! It was insane to hear his story.  I got him ice, and he wanted to go on! Our aid station captain told him he needed to wait to be taken to a hospital, and he hung out icing it at the aid station. He definitely won the award for most bad ass runner that day.

I really had a blast. We were on our feet most of the time. I got eaten alive once the bugs really came out. It was so inspiring to see all the runners pour in, looking tired and some very sick, and then watching them pull themselves together and get back out there. The crew members were so awesome, and it was a blast to hang out and meet new people.

The Massanutten run
As 3 a.m. came around, our aid station started closing up. Brian and I decided we would go run some of the course, to see how it feels to run at night, in the mountains, with little sleep. I had on almost 3 layers, I was so cold, and I made the bad decision to keep my jacket on. We were both in street shoes, with a few water bottles, and completely unprepared for this crazy rocky course.

It was rough. We did the nearly 6 mile stretch from our aid station to the next and by the time I got there I wanted to curl up in a ball and quit. It took us nearly 1:34 to get to the aid station. From there, we could go up the course's biggest climb, or head back to the car for a 11 mile loop. I was so sweaty from having my jacket on, and was almost out of water. It had been my first run in the dark, and I tripped over some rocks, banging up my hip and chest pretty badly (still hurts... ouch).  My calf was tight, my shoes were not built for those rocks, and I wanted to go on, but I voted to head back to the car. I finally got to feel what running up a mountain is like--and I will have nightmares about it until October.

This was great in that I learned a few things from Brian re- trail running. For example, when you run downhill, you need to keep your body over your legs, which builds up speed and helps gravity pull you down. But, on rocky trails you can't run that fast because of the footing, and so my knees were killing me after running downhill. Brian told me to lift up my knees more and stagger my steps and it really helped!

Brian is such a great runner. He treks uphill faster than I run on flats. I keep forgetting he's a guy and so that's kind of ok. Its probably a good thing, he makes me run faster, but it also makes me feel like I'm slow and out of shape. What was funny is that after we got up the next hill, we were on a road for 3 miles and somehow got 8:49, 8:26, and 8:14 splits. I felt comfortable again getting back onto a road.  When we got into the car, we both felt pretty good and so decided Brian would drive back to DC right away instead of taking a nap. I just wanted to get off my feet. I was feeling like the biggest failure ever.

I realized I'd signed up for a whole different level of trail running. These mountains were serious. I needed to live to do hill training. I needed to do more work in higher heart rate zones. I needed strength training. I needed to get in more and more miles than I've ever done before. I felt awful as we drove back into DC. Surely, I sucked at running and had no idea what I was doing. 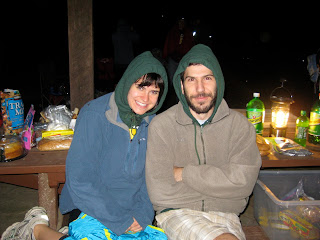 Riverbend Park run
On the way home I saw the Great Falls exit, and joked that we should put in some miles on the race course. Before I could say I was kidding, we were on the exit and Brian looked for Riverbend Park, where the course hills are. Awesome. I felt like this was the worst idea ever. I was exhausted and wanted to get home to bed. Once I got to the bathroom, washed my face, filled up my water bottle, and got onto the trail, it was an instant runner's high. I felt amazing (even though I tripped again).

We had a blast, tearing up the hills that looked so tiny compared to our last climb.  When we got to a field, I joked that we should frolic through it, and so we started skipping on the trail. All my confidence came back. We did an extra 11.5 miles and I felt more ready than ever for my upcoming 50-miler. I couldn't stop laughing. It was a great reminder that I love running.
Posted by Brittany Zale at 8:45 PM