Reflections on life, death, injuries, and other lightweight matters

(Disclaimer: My title was stolen from the VHTRC list-serve)

For the past few weeks, the VHTRC listserve has been filled with e-mails about Mike Broderick, a Happy Trail member who recently died of lung cancer, only 4 weeks after he was suddenly diagnosed, and who just completed Western States four months ago.  Stories like that hit everyone, even newcomers like me who didn't know him, because ultrarunners like to think we're strong, invincible, and able to overcome whatever life throws at us... even death. All my housemates went to the funeral, friends changed their facebook pictures to photos with Mike, and paid tribute through a blog post. It was sad to see my friends mourn a loss of another running partner, friend, and coach.

Within a week of his funeral, I got a text message from my cousin that an old friend of mine, Anne Jackson, a cross country runner at Nyack college in NY, collapsed while out for an evening run and died before her family made it to the hospital. She was a senior in college (with a 3.97 GPA--holy cow!), 21 years old, and had not a bad bone in her body. She was young, healthy, and there was no known pre-existing condition. It was so sudden and shocking, and her friends, now scattered across the country, are mourning the sudden loss of a runner and friend. I can't imagine how her family, close friends, and teammates are handling this tragedy. My thoughts and prayers have been with them every waking moment since hearing of her death.

Yesterday, after hearing the news, I stumbled onto another blog with a tribute to Mike, and I was almost angry. His life shouldn't be mourned; he had really lived, he had fair warning, he completed races around the world and had touched so many lives that police were needed to direct traffic to his funeral. Anne was too young, it was too sudden, and it all of it too shocking and unfair.

I became friends with Anne through our church when I was around 14 years old. She was two years younger than me, but we had the same group of friends. We lived near each other and so we would often carpool to events or meet up on weekdays. I have so many wonderful memories that include her, and I don't remember one in which she was not smiling... looking through her facebook pictures, I swear that she is glowing in every one.

Moving away from home to go to college is tough. She stayed close friends with everyone in Buffalo, and was the Maid of Honor at our friend's wedding earlier this year. Unlike me. I barely talk to my friends anymore. I think a comment on a facebook photo about the beautiful wedding pictures is sufficient... I didn't even send a card. I envy her ability to stay close with our friends, and I've been hearing from them throughout the last 24 hours. Things like "I feel like I should tell you I love you..because I do! and I never said it enough to anne..and I certainly don't say it enough to you." What kind of person does it make me that I haven't spoken to people that I considered my best friends five year ago, in years? Is it time and miles that bring people apart, or is it people?

And what of the friends and relationships I have now? Already, since it isn't as convenient as when we were in college, I make little room for my closest girlfriends and sorority sisters. I'm fighting an injury, and I wonder what will ever happen if I am out for months on end. If I get seriously injured, will I keep my friendships and ties with the running community I've jumped into, or will I lose them as friends too? I am thankful that while miles have hurt friendships in the past, they build friendships today.

Runners are supposed to be patient people. When we get injured we should build miles up slowly. We shouldn't race too much too quick. We all schedule only 1-2 big races a year. I keep getting told I don't need to do every big race in my first few years of running. Recent events have put into perspective that maybe we shouldn't be patient. You never know when you'll get injured, get in a car accident, or have one of your vital organs fail you. I might not be able to run Western States in 2012 or 13... and it's awful bold to think I will be. 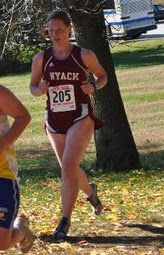 Last night, I wanted to go out for a run for Anne. In a way, to let out all the frustrations of the week and the sadness that I feel guilty for feeling. I walked for about 5 minutes and then tried running again. I was able to run for about two minutes before my IT band felt tight. I stopped and walked home, knowing that the only way it will heal is by resting it. After just completing my 100 mile race (101.87, actually) less than two months ago, I've had to deal with a tight IT Band that kept me from doing well at MCM and kept me out of my running shoes for weeks. Even though I have never felt more strong and able, I cannot overcome this injury.

And that's what I've learned recently, as a runner and a person, that even when we feel our stongest, we're still weak and fragile.
Posted by Brittany Zale at 11:50 AM