Trains well with others

Before say, February, I was always dead-set on running alone. I liked to head out with my water, iPod, garmin, and feel free to speed up, slow down, stop to adjust my shoe, and run whenever I wanted to. I didn't understand why people ran with groups. Why on earth would you want to do that? When I did run with a friend that was visiting, or my roommates, it was nice but I wanted to put my iPod back on and reclaim my "me-time."

I joked that I didn't train well with others.

Now, I have two running groups and I almost always do my long runs with Brian. I only run with my iPod half the time, I'm moving into a house of ultrarunners, and I plan on taking advantage of group runs and training runs in the mountains. My last race, I spent more than half of it running with someone else. Basically, I have decided to let running take over every aspect of my life (including dating) and I've become a group run convert. Here is a narrative of my slippery slope.

First, in an attempt to get motivated almost a year ago I joined twitter, starting blogging, and started talking to other runners. I loved the community aspect of running, but still resisted running with people. I met someone who put me on a listserve of those running the North Face race, and it was selfish, but I started opening up to the aspect of running with them so I had access to the race course because I didn't have a car.

This is how I met Brian and we became very fast friends and both signed up for Grindstone, with the promise that we'd train together. We started running together and I couldn't believe how fast 15 miles went by when we were chatting. We volunteered at MMT 100, and met a bunch of people associated with VHTRC and were told we needed to go come out to WUS runs.


Woodley Ultra Society
It was mostly ultrarunnergirl's fault that I started coming to these runs. Two groups head out from "the ultra house" (a.k.a. my new home) into Rock Creek Park for about an hour and a half every Tuesday and end up at a bar with great pizza specials. The first couple times, I ran with the first, leisurely paced group and it was a blast. We talked, walked up hills, took it easy, and had a lot of fun as I learned how to navigate RCP. We all eat at least 1/2 a pizza and sit out on the patio of the bar after with a few beers, and then I run to my friend's house just a mile away to sleep. Its a perfect set-up!

I tried keeping up with the fast group a few weeks ago, and found that I was, in fact, able to run at a decent pace on the trails when forced to stop overthinking it! I'd like to run with the guys more to get faster on trails. They just fly up hills like they aren't even there and it encourages me the rest of the week to get better so I can keep up. A few weeks ago, Mike Wardian and Matt Woods (first place at TNF race) showed up. I was already feeling sick that day and only lasted 3 miles with them, but it was pretty cool to have elite runners show up for your group run!

Hashing
What is hashing? Running, with beer stops, an after party, and constant sexual references. I've been told I needed to join for years and I can't believe it took me this long! A bunch of my college friends are there and I've decided its a must-do every week. The running isn't too difficult, but the "hares" lay trails through places like Pentagon City Mall, up a creek, and through backyards and ghetto neighborhoods. There are plenty of rules, and if you break them you're "violated" by being forced to drink a beer at the end of a run. Last week, I got four. 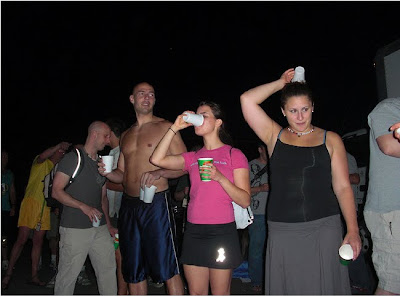 Photo by EWH3
With my group runs on Tuesday, hashing on Thursday, and long runs with Brian over the weekend, I'm doing half my running with other people, and I love it! I'm a group run convert, mingling social life with running and finding its much more fun!
With all these long training runs coming up, I'm getting three 50ks in 15 days, all of which were either free or less than $30. Two are in the mountains, and I know they will be great workouts and I always have fun at races.  In August, there is a big, group training weekend for Grindstone, where they split up the "out" part of the course into two days of running with camping in between. Do I have a tent? No. Have I ever been camping before? No. Have I ever been hiking before? No. I'm still trying to figure out why I think I can do this.
Posted by Brittany Zale at 10:44 AM